A WARMING TREND IN RESTAURANT SERVICE
A turn toward friendlier, perk-filled service is winning customer loyalty and even a few hugs at some of the country’s top restaurants. Industry leaders like Will Guidara of Manhattan’s Eleven Madison Park and the NoMad are helping to shift some of the spotlight from the kitchen to the front of the house. 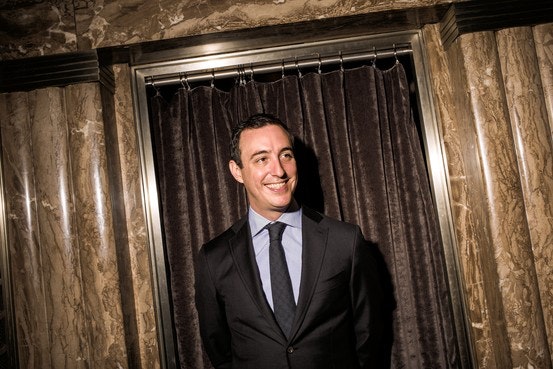 WHERE EVERYBODY KNOWS YOUR NAME | Owner Will Guidara offers guests a warm welcome at Manhattan’s Eleven Madison Park. William Mebane for The Wall Street Journal

AT GABRIEL STULMAN’S six cozy restaurants in Manhattan, waiters, bartenders and hosts can drink on the job, play their own music over the sound system and wear just about anything they like. Happy staff makes for happy customers, the thinking goes. “How much fun can you have as a diner if everyone around who’s serving looks miserable?” said Mr. Stulman. As company policy, his whole team is encouraged to offer a drink or dish on the house every day, and to lavish guests with such warmth they may want to pay it back with a hug.

“We started a competition at all of our restaurants—who can get the most unsolicited hugs,” said Mr. Stulman, 33, last month. He was outlining his unorthodox policies at the first Welcome Conference on hospitality—part TED Talk, part networking mixer—held in New York. “We have this mantra,” he continued, addressing an audience of his peers on the service side of the restaurant trade. “Treat celebrities like locals, and locals like celebrities, because everyone loves to be made to feel special.”

On stage that day were other dining-room leaders—from restaurants in Chicago, Seattle and New York—who are reshaping the role, and raising the profile, of restaurants’ front-of-the-house staff. “If more people aren’t getting super-excited about pursuing careers in hospitality, elements of the craft are going to die,” said conference co-organizer Will Guidara, 34, the waiter-turned-restaurateur who owns New York’s Eleven Madison Park and the NoMad with chef Daniel Humm.

Like many of the next-generation impresarios running some of the country’s best restaurants, Mr. Guidara has troves of data on his guests culled from Google, GOOGL +1.14% Facebook FB +2.26% and Yelp, and a knack for anticipating their needs and desires without creeping anyone out. Mr. Guidara’s team might pull out your chair and fold up your napkin, but while his places are fancy, they’re never stuffy. The restaurants are almost as well known for their raucous parties—an annual tradition on Halloween and Kentucky Derby day—as for their extreme personal touch. The new impresarios are buttoned-up when they need to be, but also know when to let loose.

Mr. Guidara bared his soul on stage at the conference, sharing the story of his mother’s fight with cancer. “She taught me about how good it feels when the person you’re with is fully present with you and how good it feels to be fully present with them too,” he said. “And, as I’ve pursued this craft in the years since, I’ve tried to do just that, to block out all the noise and all the static and focus on the person I’m with.”

That sort of emotional honesty informs the motivational management style that’s a common thread these days among the country’s most dynamic new dining room leaders: encouraging empathy in pursuit of genuine warmth. “In the same way that cooking is a muscle, so is hospitality and service,” said Mr. Guidara. While new servers at his flagship restaurant study a 97-page manual when they start, and spend weeks practicing basic tasks before graduating to the floor, it’s at regular team-building “happy hours” that they cement a real sense of community. Despite the formality, there’s a loose, collaborative spirit inspired by the music of Miles Davis, the jazz god whose portrait hangs in the kitchen.

In Seattle, Brian Canlis, 36—Mr. Guidara’s old roommate from Cornell Hotel School—has spent the last five years turning his family’s eponymous, 64-year-old fine dining landmark into a “four-star restaurant for the next generation.” Working with his older brother Mark, Mr. Canlis introduced a new style of service—still formal, but more relaxed—to match the new cutting-edge dishes served by Jason Franey, the young chef they brought in (a former executive sous-chef from Eleven Madison Park). “There are no longer 10 pieces of silver on the table,” he said, referring to the more formal style of service embraced by his parents’ generation. “Serving guests in a way that’s beautiful, gracious, creative, different—that’s what I get excited about.”

The Canlis brothers were also speakers at the Welcome Conference, sharing thoughts on what it is to be truly hospitable. “It isn’t about transactions,” said Mark Canlis, “it’s about relationships.” They told a story about five sisters who’d come into Canlis for one last meal with their mother, who was terminally ill. “They walk through the door fragile and gentle,” said Brian Canlis, “and they hold [their vulnerability] out to you and they say, ‘Can you take care of it for us?’ ” His brother picked up the thread: “That’s what a guest does when they walk into your establishment. That is what they want, they want to be safe.” In between presentations that day, the brothers relished the rare opportunity to mix with front-of-the-house colleagues from around the country.

“Chefs have lots of natural ways to connect, at the greenmarket, at collaborative dinners,” said Anthony Rudolf, 33, the former general manager at New York restaurant Per Se who worked with Mr. Guidara to get the event off the ground. For front-of-the-house staff, Mr. Rudolf continued, “there’s really no natural mechanism—so we had to create something new.”

Mr. Guidara and Mr. Rudolf were once rivals at the top of the restaurant game. A few years back they realized it might make more sense to cooperate instead. Over casual drinks, the two created a new trade organization, the New York City Dining Room Collaborative. The 10 founding members—maitre d’s, owners and managers—shared ideas and experiences over more drinks at their first meeting two years ago at Eleven Madison Park (the group has since grown to 30-plus members). The Welcome Conference was a natural extension of that.

The ultimate goal of both endeavors is to create a sense of community long missing among professionals at the front of the house, and in the process encourage ambitious young men and women to pursue real careers there. Fifteen years ago, when Mr. Rudolf was a student at the Culinary Institute of America—the country’s top chef school, in Hyde Park, N.Y.—only 5% of graduates planned on a dining-room path. Today, that number is in excess of 20%.

One man, veteran restaurateur Danny Meyer, has done more to inspire this new generation than anyone else. Though conspicuous in his absence from the hospitality conference—he was invited, but had to decline—his pioneering work informed just about every talk.

Almost 30 years ago, when Mr. Meyer opened his first New York restaurant, Union Square Cafe, it featured the warmest servers in town delivering ambitious food to linen-free tables and bar tops. “In the 1980s I would go to all these hot restaurants to learn about the business,” he said. “The food was really exciting, but I started to realize people weren’t always that nice.”

Mr. Meyer set out to create a new sort of dining room culture centered not on service (the technical aspects of working a room), but hospitality (the way you’re made to feel there). He looked for people who “are actually happiest when they’re making you happy,” then set out to create an environment in which they’d want to work, a place that felt less like a job than a calling. The intuitive ingredients that made that first restaurant—and the ones that followed—sensational hits were eventually codified in his seminal book, “Setting the Table,” published in 2006.

“That book changed the industry,” said Mr. Guidara, who worked for Mr. Meyer for many years. “How I approach culture and hospitality are fully rooted in Danny’s philosophies.”

These days, even Mr. Meyer’s organization has new blood at the top. Late last year the restaurateur plucked a rising star, 38-year-old Sabato Sagaria—former food and beverage director at the Little Nell Hotel in Aspen, Colo.—to be his first-ever lieutenant. While Mr. Meyer focuses on his rapidly expanding Shake Shack burger chain (which just opened its 48th outpost), his new chief restaurant officer will run his 10 full-service venues, focusing, he said, on “continuing to grow talent from within.”

Mr. Sagaria seemed to be applying for the job from the moment they met, when Mr. Meyer was a guest at the Little Nell one summer. Mr. Meyer recalled, “He had laid out all the ingredients for my favorite cocktail and put a copy of my book on top of the bar in the room. You can’t teach that kind of thinking—putting the heart and mind together.”

Service Standards
The following restaurants receive as many accolades for their polished, professional, not-too-self-serious service as for their ambitious food. Here are a few of their front-of-the-house flourishes:

The Restaurant at Meadowood, St. Helena, Calif. // After a tasting menu dinner at this three-Michelin-star restaurant, guests can linger over drinks and a board game in the fireplace lounge. therestaurantatmeadowood.com

Alinea, Chicago // Expect to be greeted by your name even before you give it at this cutting-edge restaurant, where the database of guest information often includes personal photos as well as lists of likes and dislikes. alinearestaurant.com

Canlis, Seattle // An update on the signature Canlis Salad, introduced when this restaurant first opened in the 1950s, is prepared table-side by waiters on a handmade brass-and-wenge wood cart. Braver guests can order an after-dinner Café Diablo, also assembled—and set on fire—at the table. canlis.com

Union Square Events focuses on growth despite the pandemic

How to Support Our Suppliers

Call us at 917-615-1277 or reserve below. We are reopening more of our restaurants for onsite dining soon. Stay tuned to our Instagram for updates and explore our offerings for pickup and delivery.