Food-world dynamos like the Rich Torrisi and Mario Carbone, Daisuke Nakazawa and Ivan Orkin are behind this year’s top ten dishes and drinks in NYC

By Time Out Contributors, Edited By Christina Izzo

The top 10 dishes and drinks of 2014 run the gamut from humble to high-minded, populist to pricey. There’s free Moroccan-spiced flatbread listed alongside $65 Peking duck, Italian ice cream sandwiches and golden, buttery uni sushi, and there’s a new bird ruling the city. These are the 10 defining dishes and drinks of the year. 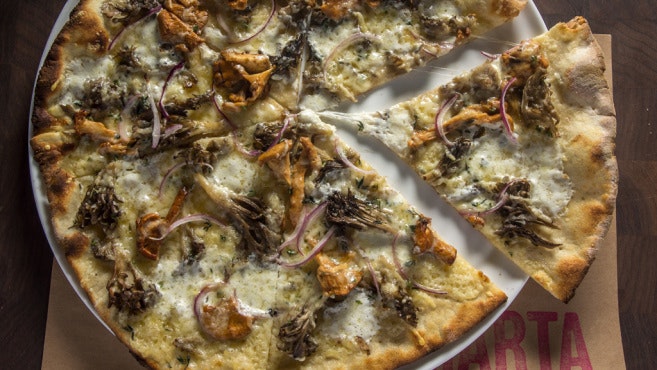 At no point while eating the wafer-thin, mushroom-paved round at Danny Meyer’s Roman pizza temple will you miss the sauce. Hell, you’ll likely not even realize that it’s lacking the customary slick of red. That’s because distinguished dough puncher Nick Anderer layers his lightweight, ember-fired crusts with oozing, sharp fontina, red onion shavings, a touch of fragrant thyme and and the woodsy one-two punch of roasted chanterelles and maitakes. Pizzaiolas of New York, take note: this is how you do a mushroom pie. $18.