10 MUSEUM RESTAURANTS WORTH TRAVELING FOR
by Chaney Kwak

Museums educate the mind, dazzle the eye, and, in some cases, entertain the palate. Far from offering cafeteria chow, cultural institutions today often have restaurants that are Michelin-starred fine-dining experiences—or simply serve excellent local dishes. Here are ten of our favorite museum restaurants around the world.

The Modern at The Museum of Modern Art 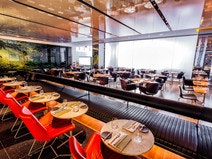 The museum: It’s not hyperbole to say that New York’s Museum of Modern Art is one of the world’s most influential art museums. It routinely hosts blockbuster exhibits (such as last year’s “Matisse: The Cut-Outs”), and its holdings—which include masterpieces from Van Gogh, Pollock, and Picasso—are unparalleled.