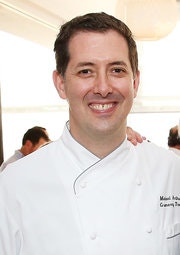 Union Square Hospitality Group, which will run the restaurant in the new Whitney Museum of American Art at the High Line, has named Michael Anthony, the executive chef of Gramercy Tavern, as its executive chef and managing partner.

The restaurant, to be called Untitled, will have the same name as the one in the old museum on the Upper East Side. But it is meant to be a more serious, full-service restaurant than the diner-style room uptown.

Mr. Anthony, who succeeded Tom Colicchio as executive chef at Gramercy Tavern in 2006, will keep that job as well, but his sous-chef, Howard Kalachnikoff, is being elevated to chef de cuisine.

Untitled, designed by Renzo Piano, like the museum, will have its own street entrance; museum admission is not required. Mr. Anthony will also run Studio Cafe on the eighth floor, for museumgoers.