CAN DANNY MEYER DO FOR PIZZA WHAT HE DID FOR BURGERS?
By Alan Richman 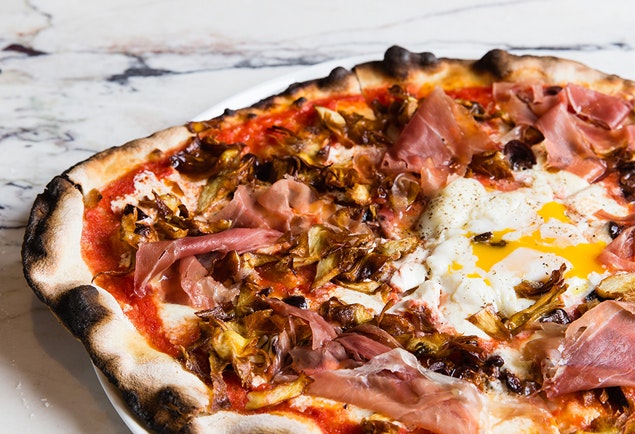 Somewhat like cake and icing, pizza is divided into two parts.

There’s the crust, and then there’s the topping. I suspect that normal eaters, a category that excludes food writers, care more about toppings than whatever regional style of crust they’re eating. I seldom feel that way, unless pepperoni is involved.

I consider myself a pizza obsessive, one who participates in the critical analysis of crusts. Such studies have something to do with urban sociology, something to do with food science, and much to do with history. Crusts differ, usually in admirable and fascinating ways, wherever pizza is beloved. When thoughtfully prepared, the pizza crust is a simple food that pleases a majority of our senses. Inasmuch as it’s a cousin to warm bread, the earthy fragrance triggers memories of pleasures past, while the texture, be it crunchy, soft, or crackling, provides primal bliss. Toppings are an indulgence, somewhat like your choice of syrup on an ice cream sundae.

There is little in the food world that compares with the thrill of a well-prepared pizza arriving at your table. Pizza is a harbinger of happiness.

The crust, to get back to business, comes in at least six fundamental forms, by my reckoning. To begin, there is Neapolitan-style (fast-cooked, very thin on the bottom, with a bulbous, puffy, outer rim), pan-style (sometimes called Sicilian and similar to a flat-topped focaccia with caramelized, crunchy edges), and nouveau-American-style (closer to bread-baking than pizza-tossing, resulting in an airy, light, aromatic crust). New York has an admirable style that deserves a subcategory of its own, a pie with a fairly thin and appealingly droopy crust. The New York pizza is best enjoyed when purchased by the slice, deftly folded, and consumed while walking along an overcrowded street.

These days, the New York slice is in decline, often sold in a sorrowful state. New Yorkers, always eager for something new, are looking elsewhere. We already have an abundance of Neapolitan, pan, and nouveau-American pies. Now two other styles have reappeared, their popularity restored. In pizza, we are like one of those Pacific islands populated by non-native species of wildlife that wash ashore.

Receiving considerable attention of late is deep-dish Chicago-style (very slow-cooked, sometimes flaky and sweet, but usually rather hard, and always a carbohydrate bomb), and thin-style (sometimes called Roman-style, but known as tavern-style in Chicago when it is sliced haphazardly, as though a slasher and not a pizzaiola were at work). Chicago-style deep-dish gained fame when Pizzeria Uno arrived here a few decades ago. The pie was a sensation at first, but the thrill faded. Thin-style pizza, which has a bottom crust even thinner than what you’ll find on a New York pie, first received attention in 2003, when Mario Batali opened Otto to cries of dismay, including mine. His early crust was barely edible. It’s now much improved.

The pies at Marta, the first pizza enterprise from Danny Meyer, who we all thought was too busy making Shake Shack burgers to care about much else, are being classified as Roman. This style of pie has never been unarguably defined, and Meyer’s are somewhat different from others I’ve encountered. Marta, in fact, is an odd sort of pizzeria. Located on the ground floor of the Martha Washington hotel on East 29th street in Manhattan, it’s vast, clearly the showpiece of the new and extensive renovation. The restaurant has more in common with the Roman Coliseum than with a Roman pizzeria.

The two oversized ovens are wood-burning, which always makes the heart race with joy, but in truth a couple minutes in a wood-burning oven does not add a great deal of flavor to a pie. There are two dining levels, as well as chandeliers that resemble giant pick-up sticks. Should you happen to be seated facing away from the ovens, you will actually have no idea that you are in a pizzeria. In fact, while Marta is being categorized as just that, the menu offers far more. The wine list is outsized, with ten Champagnes for $90 and under, and more than a dozen better-than decent bottles for less than $40, a pleasing variation on the theme of Manhattan sticker shock.

The sad truth is that the thin-crust pizza remains the most inexplicable of all pies. The crust is often flat, flabby and flavorless, which means without merit. Or it might be flat, flavorless, and crisp, which some find pleasing, although I do not. At Marta, the bottom crust is soft, supple, and very thin. The outer rim that rises above is crackling and crunchy, reminiscent of matzo.

The toppings are for the most part complex and inventive. My Patate alla Carbonara had very soft potatoes (verging on smashed), an almost-uncooked egg, guanciale (cured pork cheek), pepper, and pecorino cheese. Regardless of what pie you select from Marta’s list of eleven, you will not be bored.

At the tiny Emmett’s, on MacDougal Street just outside the official limits of Greenwich Village, Emmett Burke makes both deep-dish and thin-crust, tavern-style pies. His undersized spot, which seats about 30, including 11 at the bar, possesses a charm that puts most establishments located within the Village proper to shame. It’s a lovely throwback to what New York used to be. The entire front-of-the-house staff the day I went consisted of one young woman who took orders, carried pies to the tables, worked behind the bar, and remained cheerful throughout. Inasmuch as deep-dish pies can take more than 30 minutes to cook, her work load was not excessive.

The tables are barely large enough to hold a single pie plus a couple plates, and the dining area lacks an entryway, which means the front door opens directly to the outside. Whenever a customer enters (usually to inquiry about the wait time for a table), a blast of cold air also arrives, dropping the room temperature about five degrees. I recommend the following toppings: the crumbled sausage and a warm, woolly sweater.

Emmett’s deep-dish pies are conventionally round and come in four sizes, eight through 14 inches. The optional toppings are fundamental and few, a touch of old-world simplicity. The tavern-style pizza—not on the written menu—is square, comes in one size, and is particularly lovely when topped with sausage, the red, brown and orange hues a welcome sight to a hungry man stopping by after a night of bowling.

All of the Emmett’s pies are attractive, and the tomato sauce is herbaceous and spicy. The problem here is the crusts. They are not good. In fact, they are depressing. The tavern-style crust was very thin and slightly doughy, as though it was supposed to rise but did not. Any crust this tasteless should at least be crunchy, but mine was not. The deep-dish crust was nicely browned but totally bland, with the flavor profile of a thick, dry, unsalted cracker, one of those English things. The several-inch-high crust encircled a reservoir filled with too much cheese and even more chunky tomato sauce. Emmett isn’t to blame, for such a filling is an essential component of every deep-dish pie. One might as well drink tomato sauce directly from the can.

I don’t think either of these establishments, despite their virtues, offers the best pies in New York. They are in business for several reasons: Danny Meyer has always been fascinated by all things Roman, and Emmett Burke hails from the suburbs of Chicago. A fundamental reason for the early success of both places is that New Yorkers are forever after what is new, not what they have always known and loved. That’s not how pizza is enjoyed in the rest of America.

By my count, five of the six fundamental American pizza options are now ensconced within the city. Yet to arrive, to my knowledge, is grilled-style pizza (a specialty of Providence, Rhode Island, and tastier than you might think). We are close to having it all, and, to be honest, New Yorkers demand nothing less.