GASTRONOMES FORAGING FOR BARGAIN TRUFFLES ARE IN LUCK

Glut Ripples Through Pricey Eateries; Only $900 a Pound
By Alexandra Wexler 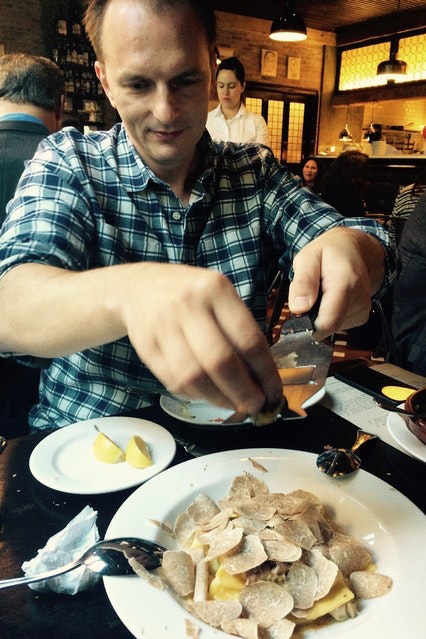 Locanda Verde, an Italian restaurant in Manhattan’s Tribeca neighborhood, is now serving white truffles shaved over pasta for the bargain price of $50, down from $100 last year.

“We call it truffles for the people,” says chef Andrew Carmellini.

The restaurant has also expanded an event called Trufflepalooza, which features three courses of white-truffle indulgence. It used to be a one-night affair. This year, Trufflepalooza ran for two months and truffles will be offered on New Year’s Eve.

A wet, warm summer in Northern Italy, where the world’s most desirable white truffles are dug up, has produced a bumper fungi crop. That pushed prices down about 50% from last year, according to chefs, dealers and restaurant operators.

The steep drop sparked an unprecedented frenzy as truffle hunters, brokers and chefs have scrambled to move the delicate merchandise. That has led to some unheard-of contortions in pricey dining rooms.

“They’re like diamonds,” said John Magazino, import specialist at the Chefs’ Warehouse, a specialty food distributor in Ridgefield, Conn. He said wholesale prices are the lowest he has seen in about 15 years. He’s selling truffles for just below $1,000 to about $2,400 a pound depending on their size, down from $4,000 to $7,000 a pound in 2006. Larger truffles typically cost more.

“The biggest ones aren’t necessarily the best ones, but they look really cool,” Mr. Carmellini said, as he shaved a generous portion from a fig-sized truffle over polenta with spiced pork sausage and taleggio.

Mr. Magazino estimates that he’s selling as much as a third more white truffles than during the same time last year. “The people who normally buy truffles are buying a lot more, and it’s opened up a second tier of restaurants,” he said.

At Kingside, a new American restaurant in midtown Manhattan’s Viceroy New York hotel, executive chef Marc Murphy said, “We have just been going at it.” This year, Mr. Murphy said he is paying between $900 and $1,200 a pound for white truffles, versus $1,200 to $1,800 a pound last year.

“Because they’re so much more accessible, we’re using them as much as we can,” Mr. Murphy said.

Large swings in white truffle prices aren’t unprecedented. The tubers have resisted agricultural industrialization—unlike lobsters or caviar, these specialty foods aren’t farmed or cultivated in a meaningful way. White truffles need extremely specific growing conditions, forming symbiotically within the roots of trees, such as oaks. Truffle hunting in the towns of the Piedmont region of Italy, where the most desirable and aromatic white truffles come from, is often a secretive and highly competitive venture.

One reason white truffles are so expensive is their short shelf life. They last from just a few days to a few weeks, with the average running about 10 days from the time it’s yanked out of the ground by a truffle hunter, chefs and truffle dealers said. Lower prices this year are helping push higher volumes through restaurants.

“Our captains are going around the room, literally shaving truffles off all over the place,” said John Meadow, founder of LDV Hospitality, which operates Scarpetta in New York’s meatpacking district.

“That extraordinary decrease is exciting,” Mr. Meadow said. It allowed the restaurant to launch a six-course truffle tasting menu on Mondays, including turbot and Wagyu beef, for $125 per person.

“Offering truffles with turbot was just something you could never do before because you couldn’t afford to do it,” Mr. Meadow said. “It’s borderline excessively decadent.” 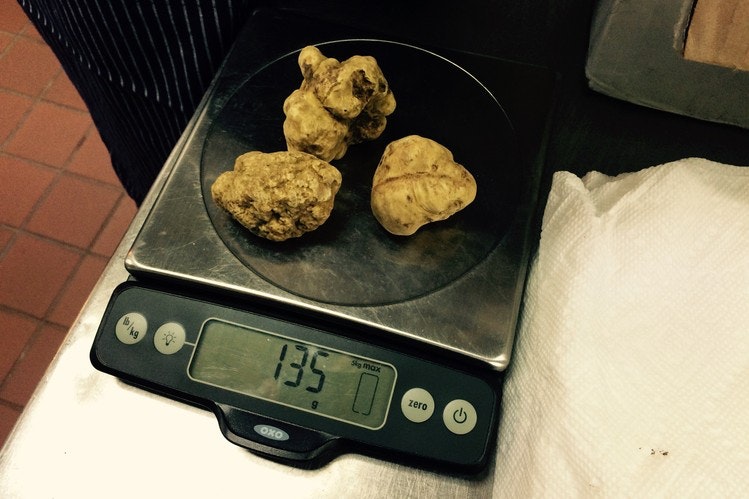 Carmen Quagliata, executive chef at Union Square Café, is charging the same price for truffles as last year on prepared dishes, but serving a more generous portion. “People go, ‘wow,’ when they see the amount shaved onto their plates,” Mr. Quagliata said.

“Instead of putting them on a pedestal, we decided to give as many people as possible the opportunity to try them and enjoy them,” said Sabato Sagaria, chief restaurant officer at the Union Square Hospitality Group, whose restaurants include Union Square Café and The Modern.

This year, Mr. Sagaria instituted the Truffle Shuffle, a week of truffle dishes paired with a glass of wine for $50, available at seven of the group’s restaurants, including ones that don’t typically have truffles on the menu, like barbecue restaurant Blue Smoke and Gramercy Tavern.

The lower prices this season “have given us a little more leeway in highlighting truffles than we [otherwise] would have had,” Mr. Sagaria said. “They were something sort of priced out of reach for people to enjoy.”

Executive Chef Abram Bissell at The Modern has been offering truffles at his cost. He’s charging $28 for white truffles to be added to a plate, in generous six-gram portions. That’s down from $38 a plate at the start of the season, based on falling wholesale prices.

For diners, “it removes the question of, ‘Should I do that?,’ and makes it, ‘I have to do that,’” he said. “I think it’s really made it something that’s more approachable to everyone, and we’re using them in more ways than we have before.”

Mr. Bissell is purchasing four to six times more truffles a week this year than last year. “I have always kept eggs with my white truffles because the porous shell absorbs the flavor,” Mr. Bissell said. Now he can have 60 to 90 eggs curing with white truffles, rather than just a dozen.

Nontraditional truffle-using restaurants are also getting in on the action. Because of the ideal growing conditions, the quality of this season’s white truffles is quite high. Sushi Nakazawa, a $120 to $150 per person restaurant, is offering white truffles as an add-on for $20 to its sea urchin course.

“The two items work very well together,” said Alessandro Borgognone, co-owner of the restaurant. He said the high quality of the fungi this season led to their inclusion on the menu for the first time.